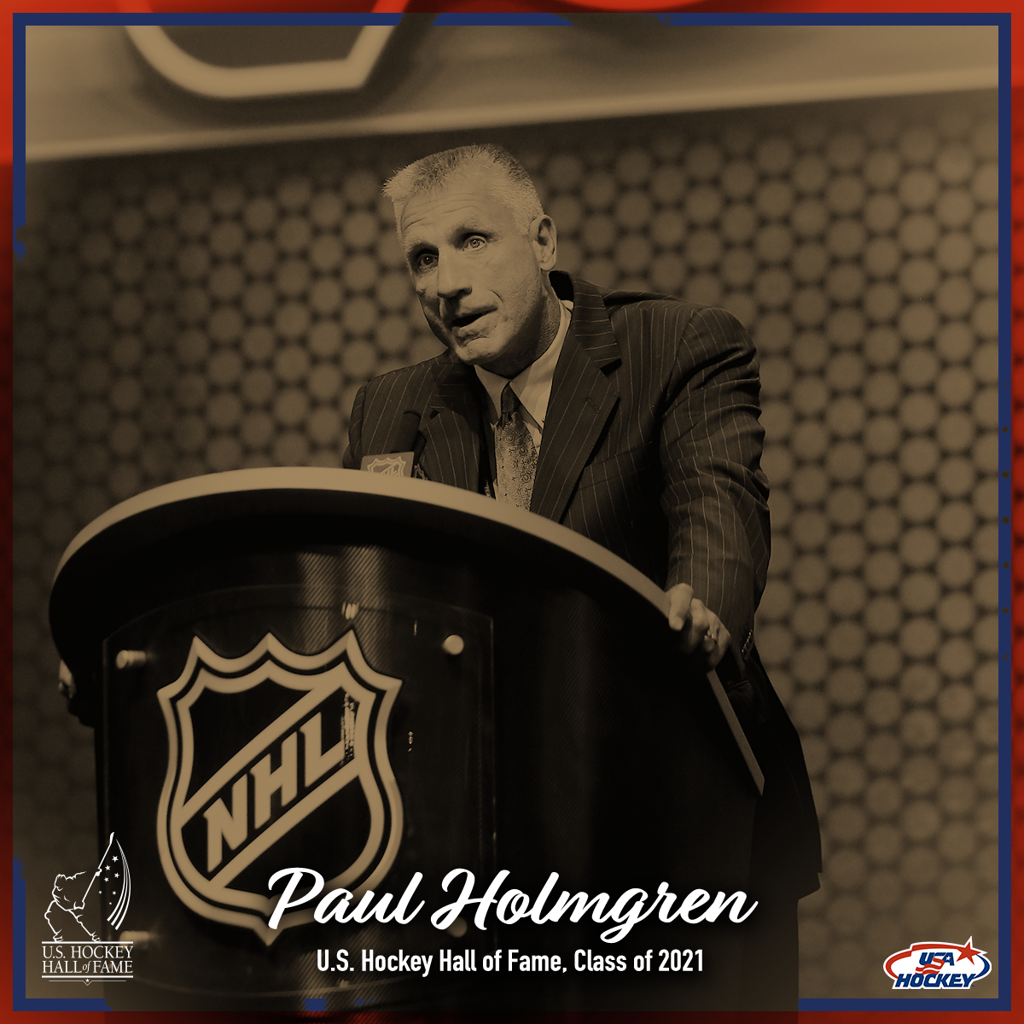 Paul Holmgren’s (Saint Paul, Minn.) exemplary career in hockey is highlighted by more than 40 years with the NHL’s Philadelphia Flyers over parts of six decades, in addition to major contributions to American hockey on other stages, including serving as an original member of the U.S. Men’s National Team Advisory Group and helping guide Team USA to the 1996 World Cup of Hockey championship.

The St. Paul, Minnesota, native, is the only person ever to serve as a player, assistant coach, head coach, general manager and president of the Flyers and today serves as senior advisor for the club.

Drafted from the University of Minnesota in the sixth round of the 1975 NHL Draft, Holmgren’s NHL playing career began with the Flyers on March 25, 1975. It was the first of 500 games he played for Philadelphia in parts of nine seasons. He helped the Flyers to the Stanley Cup Final in 1976, and again in 1980 when he became the first American-born player in NHL history to record a hat trick during the Stanley Cup Final. He earned a spot in the 1981 NHL All-Star Game and was the lone American on the Campbell Conference entry.

In 10 NHL campaigns, he played in 527 regular-season games and recorded 323 points (144G, 179A). Holmgren helped his teams to the Stanley Cup Playoffs in each of his nine full seasons in the league and contributed 51 points (19G, 32A) in 82 playoff appearances.

Holmgren became an assistant coach for the Flyers following retirement and was promoted to head coach in 1988. In his first season, he guided Philadelphia to the Conference Finals. Holmgren spent four years behind the Flyers bench before spending parts of four seasons with the Hartford Whalers as head coach and/or general manager.

He returned to the Flyers in November of 1995 as a scout and less than two months later was tabbed director of pro scouting. He earned the role of director of player personnel in August of 1997 and was promoted to assistant general manager on June 14, 1999, a role he held for seven seasons before taking over as the team’s general manager on Oct. 22, 2006.

During his time as general manager, Holmgren led the Flyers through one of the most successful stretches in franchise history, with five consecutive playoff appearances from 2008-12 and seven playoff series wins during that time. That run included Philadelphia’s eighth trip to the Stanley Cup Finals in 2010 after qualifying for the playoffs on the last day of the regular season. In his eight years as general manager, Holmgren’s teams posted a 307-234-73 record and made six playoff appearances. He was promoted to team president on May 7, 2014, and served five seasons in the role, overseeing both the business and hockey operations of the franchise.

Holmgren has been involved with U.S. teams on the international stage on multiple occasions, including as an assistant coach for Team USA at the inaugural World Cup of Hockey in 1996 when the U.S. secured the tournament title, and also in the 1988 Olympic Winter Games. He also was the assistant general manager of the 2006 U.S. Olympic Men’s Ice Hockey Team, general manager of the 2006 U.S Men’s National Team and assistant general manager for Team USA in the 2016 World Cup of Hockey. In addition, Holmgren was a founding member of the U.S. Men’s National Team Advisory Group in 2007 and served for eight seasons in helping select U.S. Men’s National Teams. As a player, Holmgren represented Team USA at the inaugural World Junior Ice Hockey Championship in 1974.